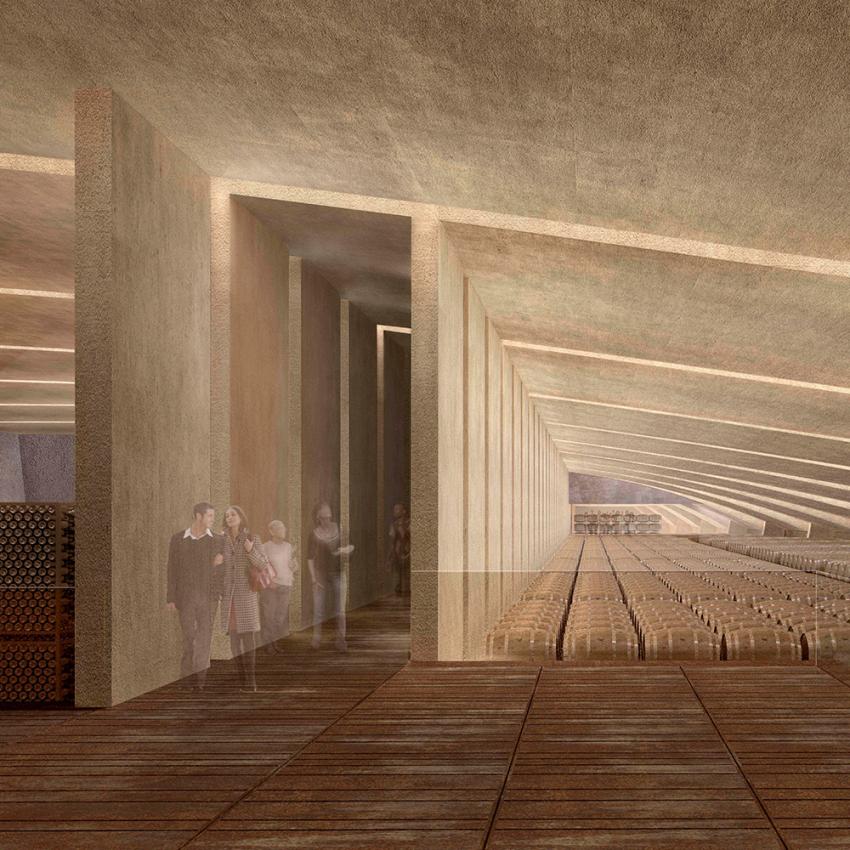 · The business group –owned by the Suqué-Mateu family– and its Wines and Cavas Division invest 30 million euros in a project that pursues excellence in wine and aims to elevate both its brand and the DO Empordà into an industry leader both domestically and outside Catalonia’s borders.
· The Olot-based architecture firm, recipients of the prestigious Pritzker Architecture Prize, have designed a unique building that seamlessly integrates  with its environment and serves as a European pioneer in terms of sustainability.
· Construction, which will start this June, is expected to be completed in 2019. The new facilities will occupy a total area of 18,200 m2, with a production capacity that will exceed two million bottles of wine per year.

Barcelona, June 2017. Perelada Vins i Caves has given the green light to the construction of its new winery, commissioning the renowned RCR architecture firm to head this ambitious project that will mark a milestone for the company and its fine wines as well as the DO Empordà.

The decision to build a new winery aligns with the values that have been the cornerstones of the company from the start: a passion for making great wines and a firm belief in a commitment to experimentation and innovation. It is also the culmination of a love story that brought together
the family that owns the company and the Empordà over a century ago.

The design process for the new winery began when the Suqué-Mateu family –the owners of Perelada– decided to place its trust in the intuition of RCR and the pure lines of its architecture, based on respect for the existing landscape and prioritizing the emotional and experiential aspects of the resulting space. “Dialogue with RCR was fluid from the start and we were convinced that one day we would reach the point where we are now. The fact that we are about to start construction on what will be a ground-breaking and innovative winery is a source of excitement and pride, but also a responsibility and a challenge, not only because it represents a huge leap forward in the search for excellence in wine, but also because we want to be at the forefront of architecture and sustainability”, says Javier Suqué, president of Perelada Vins i Caves.

The Olot-based firm, comprised of Rafael Aranda, Carme Pigem and Ramon Vilalta, has designed a project guided by the desire to create a timeless building with a strong personality that fully integrates with the surrounding environment. The new Castell de Perelada winery will become operational in 2019 and aims to be the first in Europe to boast the LEED® BD+C environmental and energy certification, a credential developed by US Green Building Council that will accredit the sustainability and high efficiency of the building’s design and construction. “With the new winery we intend to create a unique building with an architecture based on a strong, global design that seeks to connect the exterior and the interior and will achieve a unique and individual image that will identify both the project and Perelada wines”, says Rafael Aranda.

Since its foundation, Perelada Vins i Caves has aimed to reflect the region’s personality, heterogeneity and enormous wine-growing potential. The main reason for the success of Perelada wines, the leading DO Empordà winery, was precisely this aspiration to extract the maximum potential from the terroir in order to create a balanced and complete range of unmistakable wines that provide a taste of the region in every glass.

As described by the winery, the Empordà “is a small area where there is a variety of soils found in few other places in the world. Slate slopes, sandy valleys, fluvial sediment, a land rich in silt and clay, gravel soils… lands that have borne witness to how different civilizations cultivated the art of wine. The contrasts of the land on which the vines grow allows Perelada to obtain grapes with a wide range of nuances”.

The Perelada wine tradition has been revitalized in recent decades through the incorporation of cutting-edge technology and a particular focus on experimentation. However, the new winery building will reinforce Perelada’s commitment to fine wines and provide the necessary impetus to turn the DO Empordà into an internationally recognized designation of origin.

Perelada Vins i Caves was born in 1923 when Miquel Mateu bought the fourteenth-century Castell de Perelada estate and revitalized the Empordà’s traditional wine-growing industry by opening the Perelada Vins i Caves winery on the same spot where wine had been made since the Middle Ages. Today, a little over five years shy of its 100 year anniversary, Perelada is one of the most significant crossroads of its history, a milestone for what is considered the DO Empordà’s leading winery.

According to Suqué, “this ambitious project will contribute to the expansion of Perelada’s historical, artistic and scenic heritage, turning it into a prestigious destination as well as enhance the excellence of Empordà’s wine tourism, attracting wine lovers as well as tourists who may not be interested in wine but do have a sensitivity to architecture, design, history, culture, science...”.

“We aim for the new Castell de Perelada winery to become a benchmark both within Catalonia and outside our borders. Not only will the name Perelada become synonymous with excellence in the world of wine, but it will contribute to the international expansion and recognition of the DO Empordà, still an up-and-coming DO with massive potential. Our region has a range of favorable conditions: it has tourism, first-rate cuisine, a magnificent landscape, rich history and art, a wine culture, wineries like ours, which strive to do things the right way,” says winemaker Delfí Sanahuja, technical director at Perelada.

The new single-story winery will occupy over 18,200 m2 with almost entirely new facilities. It will be located on a plot adjacent to “La Granja”, a palatial building with a rural feel designed in 1941 by Adolf Florensa –one of the main driving forces behind the reform of Barcelona’s Barri Gotic that began in the ‘20s– and constructed on a platform raised 10 meters above the rest of the plot.

“From the outset we were clear that we wanted to reinforce the character of the place and not conflict with the existing buildings. To that end, we conceived of a structure that resulted from this singularity: by completing this raised exterior plane we create a new landscape, a moving terrain on the current grounds which, through its construction in strips, will be understood as a building linked to its topography, fully integrated and quite different from the conventional idea of a building”, says Aranda. “Using La Granja’s own concept as a lookout over the landscape as a departure point, the building will take advantage of the uneven terrain, reaching the wall that marks the platform of the main house and extending to the limits defined by the roads, turning into a slope that connects the site’s two levels. This is how we will create spaces with the area and volume we need along with a carefully designed exterior look that respects the landscape”.

The design of the interior is also a challenge from an architectural point of view because an absence of pillars will make it possible for this 18,200 m2 building to be a completely open space, which favor a linear sequence and uninterrupted flow work, a fundamental aspect for the project developers.

Another notable feature are the large windows which provide natural light for the entire winery. The new facilities will have an intake capacity of 2,700,000 kg of grapes, which will produce over 1.9 million liters of wine, or 2.24 million bottles. In addition to providing massive production capacity, the new building will also place greater focus on the culture of wine and product sales, turning the winery into a flagship building with a massive interest for wine tourism that focuses on tastings, tours and recreational activities.

Thus, this functional space will be shared by both a large cellar and its imposing vats and a public space for visitors. The winery will be home to different environments and has been designed to facilitate tours that follow the workflow, ensuring that visitors to Perelada can see the wine-making process in detail. The winery will produce three different types of wine in three different areas: white and red wines, Perelada and Garbet estate wines, and experimental wines, where the entire process will focus more on handcrafted techniques.

The first winery in Europe built with LEED® BD+C certification

Developed by the US Green Building Council, LEED® (Leadership in Energy & Environmental Design) is a sustainable building certification system which is based on incorporating aspects related to energy efficiency, the use of alternative energy, the improvement of indoor environmental quality, efficient
water consumption, the sustainable development of outdoor spaces and the selection of materials. This voluntary certification aims to advance the use of strategies to improve the overall environmental impact of the construction industry.

The scope of the LEED® BD+C (Building Design and Construction) certification for the new Perelada winery includes the new production center, the rehabilitation of “La Granja” buildings and the exteriors of the grounds, with two hectares of vineyards. It should be noted that the entire architectural design has been created to reduce the building’s energy consumption. Both the winery and “La Granja” will have an enhanced level of thermal insulation. In addition, the winery’s foundations will be used for geothermal energy: the thermal energy of the earth will flow through the foundation piles, which will serve as heat exchangers to considerably reduce the energy consumption used for heating, cooling and hot water.

Another key aspect of the project’s sustainable design is the management of rainwater through a rainwater reservoir and a drainage network that facilitates the infiltration of water into the subsoil within the plot itself, favoring the natural water cycle and reducing both the consumption of drinking water and the saturation of sewers and water treatment plants in case of rain. The sustainable approach is also a factor in the project’s outdoor areas, maximizing open space with permeable soils and providing shade with native plant species or those adapted to the Mediterranean climate. The project also incorporates environmental criteria on issues such as material selection and indoor air quality.

About Perelada Vins i Caves

Founded in 1923 by Miquel Mateu Pla, Perelada Vins i Caves revitalized the origins of the Empordà’s wine tradition, a wine culture that can be traced back to the 14th century, when the Carmelite friars of the Carme Convent produced wine to supply the entire region.

Thanks to the efforts of three generations of the Suqué-Mateu family in planting and acquiring vineyards, selecting the best estates in the region, forming a team of highly renowned winemakers and investing in development and research, Perelada has been able to create an unmistakable personality that satisfies even the most demanding palates, taking full advantage of the Empordà enormously rich wine-making tradition.

Today, Perelada has established itself among the ranks of the finest wineries that reflect Catalonia’s charisma and tradition and has made it possible for the Empordà, the Iberian Peninsula’s oldest wine region, to experience a spectacular resurgence.