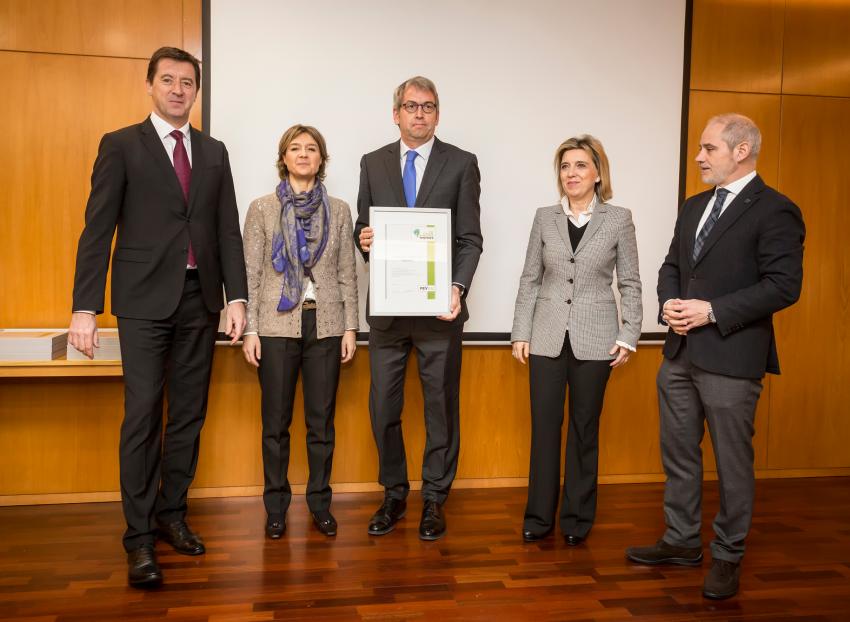 On Tuesday 28 March, the Spanish Wine Federation (FEV) and Isabel García Tejerina, the Spanish Minister of Agriculture, Fisheries, Food and the Environment, presented the Perelada winery with the diploma certifying that it has been awarded the Wineries for Climate Protection accreditation.  This award was accepted by the Perelada Group’s Marketing Director, Eugeni Llos.  Perelada thus becomes one of the first nine wineries to obtain a certificate of environmental excellence, which is the only specific sustainability certification within the wine industry. In the words of Christian Barré, president of the FEV, "This is not just another certification or claim, but the recognition of a job well done and of the continuous improvement of the wine companies in terms of environmental protection".

Climate change particularly affects the vineyards, which are very sensitive to changes in temperature and, for the wine companies, it represents the threat of a possible change in the quality and identity of its wines.  The Wineries for Climate Protection certification scheme is focused on continuous improvement and sustainability, based on four pillars: reduction in greenhouse gas emissions, water management, waste reduction, energy efficiency and renewable energy.  Minister, Isabel García Tejerina, stressed that this initiative highlights the ambitious commitment of the industry to the environment: "The wine industry is at the forefront of the fight against climate change and is a benchmark in terms of sustainability for other industries".    She also wanted to congratulate "companies which have made a considerable effort and which are today rewarded with this public recognition."

In the case of Perelada, the winery has reduced its carbon footprint by introducing improvements such as the reduction of electricity consumption and contracting its supplies from renewable sources, the reduction in the weight of its cava glass bottles, the reduction in the weight of the cardboard used in its packaging, the optimization of water use, the installation of LED lighting and automatic shut-off switches.  The winery is continuing to make improvements and is currently planning to replace its electric boiler with a biomass one.  "Perelada considers environmental protection to be a core part of its strategy and we will continue to work to make our business increasingly sustainable.  It is a great honour for us that this work, which began several years ago, has been recognized with the Wineries for Climate Protection certification", stated Eugeni Llos.

Perelada has been committed to the Wineries for Climate Protection project since its creation in 2011, when the first international symposium to discuss and exchange experiences among wine companies took place with a view to mitigating and adapting to the effects of climate change. The result was a joint commitment to reduce CO2 emissions by 20% by 2020 and the nine other points included in the “Barcelona Declaration”. This laid the foundations for the creation of the Wineries for Climate Protection certification scheme, a standard which allows the wine companies to demonstrate their performance in matters of environmental protection and sustainable development, through a third-party verification.

The Wineries for Climate Protection certificate gives wine companies a specific tool to demonstrate a real commitment to environmental sustainability in a concrete, measurable and independent manner, and to be able to communicate this to the rest of the wine value chain.  The certificate, therefore, not only has benefits in terms of   company reputation, but also provides competitive and commercial advantages in an industry in which issues such as corporate social responsibility in terms of environmental protection are increasingly considered to be an added value and a factor of differentiation.